We were thrilled to see Rosa Alcalá's MyOTHER TONGUE included in Stephanie Burt's shortlist of five poetry books in the New York Times Book Review. Burt notes that Alcalá "uses empty spaces, hesitations and semantic difficulties to address mothers and daughters, herself as mother and herself as daughter, and the messy emotions and miscommunications that move between languages..."

You can read the full New York Times review here. 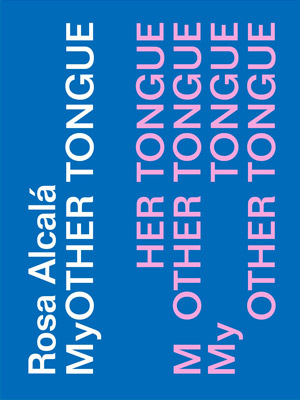 Come on down this Sunday for a book party for Rosa Alcalá's new Futurepoem book MyOTHER TONGUE.

Hosted by our friends at McNally Jackson books.

About Rosa Alcalá:
Rosa Alcalá is the author of Undocumentaries and The Lust of Unsentimental Waters. The recipient of an NEA Translation Fellowship, she has translated the work of Cecilia Vicuña, Lila Zemborain, and Lourdes Vázquez, among other poets. Spit Temple: The Selected Performances of Cecilia Vicuña, edited and translated by Alcalá, was runner-up for a PEN Award for Poetry in Translation. Born and raised in Paterson, NJ, she now lives in El Paso, TX, where she teaches in the Department of Creative Writing and Bilingual MFA Program at the University of Texas-El Paso.

About the other readers:
Cecilia Vicuña is a poet and multimedia artist born in Santiago de Chile. She has been in exile since the military coup in Chile in l973. She is the author of twenty two books of poetry, most recently Spit Temple: The Performances of Cecilia Vicuña, edited & translated by Rosa Alcalá. About to Happen, an artist book, was published earlier this year by Siglio Press. Cecilia Vicuña: The Selected Poems (1966-2015) is forthcoming from Kelsey Street Press, 2017.

Carmen Giménez Smith is the author of a memoir, Bring Down the Little Birds (University of Arizona), four poetry collections—Milk and Filth (University of Arizona), Goodbye, Flicker (University of Massachusetts), The City She Was (Center for Literary Publishing) and Odalisque in Pieces (University of Arizona)—and three poetry chapbooks—Reason's Monsters (Dusie Kollectiv), Can We Talk Here (Belladonna Books) and Glitch (Dusie Kollectiv). She has also co-edited a fiction anthology, My Mother She Killed Me, My Father He Ate Me (Penguin). She is the recipient of a 2011 American Book Award, the 2011 Juniper Prize for Poetry, and a 2011-2012 fellowship in creative nonfiction from the Howard Foundation. Formerly a Teaching-Writing Fellow at the Iowa Writers' Workshop, she now teaches in the creative writing programs at New Mexico State University and Ashland University, while serving as the editor-in-chief of the literary journal Puerto del Sol and the publisher of Noemi Press. She lives with her husband, the writer Evan Lavender-Smith, and their two children in Las Cruces, New Mexico.

Thank you to everyone who submitted to Futurepoem's open reading period this past fall/winter! We received a record number of submissions for the press this year.   We're thrilled to announce the two book selections by our guest editors Monica McClure, Pierre Joris, and Claudia La Rocco.

Near, At by Jennifer Soong
The Nancy Reagan Collection by Maxe Crandall

About the authors:
Jennifer Soong is a New Jersey and New York-based poet. She received her B.A. in English and Visual & Environmental Studies from Harvard College before working at The New School and joining the English doctoral program at Princeton University. Her poetry has been published in Berfrois, H_NGM_N, Prelude Magazine, DIAGRAM, glitterMOB, among other places, and is currently being translated into Spanish. She is the poetry editor at Nat. Brut and thinks writing poems is a bit like going around with a metal detector while looking for pearls.

Maxe Crandall is the author of the chapbook Emoji for Cher Heart (belladonna*, 2015) and the play Together Men Make Paradigms (Yo-Yo Labs, 2014), which was a finalist for the Leslie Scalapino Award. He has been awarded fellowships from Poets House, the Poetry Project, the Lambda Literary Writers Retreat, and the Millay Colony for the Arts. Maxe is a lecturer in the Feminist, Gender, and Sexuality Studies Program at Stanford University and splits his time between Berkeley and Brooklyn.

Many thanks to our staff editors, guest editors and to the volunteer readers who helped us put great care into this process. Expect more information about our new authors and their books, as well as other Futurepoem events soon. We'll announce next year's open call guest editors and dates later on this summer/early Fall. Stay tuned!

We are so thrilled to share the news that Simone White, author of Of Being Dispersed from Futurepoem, has won a 2017 Whiting Award. The "Whiting" founded in 1985 and accompanied by an award of fifty thousand dollars, are based on “early accomplishment and the promise of great work to come.” The program has recognized over 320 writers and poets, including Colson Whitehead, Suzan-Lori Parks, Alice McDermott, Akhil Sharma, David Foster Wallace, August Wilson, Tracy K. Smith, Tarell Alvin McCraney, Jeffrey Eugenides, LaTasha N. Nevada Diggs, Leopoldine Core and Mona Simpson.

You can read more about Simone's award and learn about this year's other winners at this official announcement at The Paris Review.

Our warmest congratulations to Simone on this incredible recognition of her work!

Small Press Distribution is featuring their top 40 titles in recent history and Simone White’s Of Being Dispersed published by Futurepoem is on the list! Her book is part of a limited time 20% off sale at SPD. You can find out more information at the special SPD page here.

NEW BRUCE BOONE REVIEW OF
THE SISSIES UP AT JACKET2

Jacket2 has published a new insightful review of Evan Kennedy’s The Sissies recently published by Futurepoem entitled "Paradise Now." Here's a brief quote from the reivew:

"The alien poet ever moving from agglomeration to agglomeration is a picture in motion. A nomad. A passerby, as the Thomas gospel says. That this is in fact truly the normal situation is something most of us may fail to realize. On the contrary, to think essentialistically is to be at odds with the core spirit of The Sissies. The subject of this book is, in a sense, motion itself. It is, then, a book of change."

Read the review at Jacket2.

We'll be showcasing our books and authors at the AWP Bookfair at the Washington D.C. Convention Center at a shared table with Elis Press. We will also be hosting a reading event with readers from Futurepoem, Elis and Litmus Press on Friday evening Feb. 10th. And Futurepoem Founder and Executive Editor Dan Machlin will be speaking at an AWP panel discussion Friday morning about our recent website redesign by Everything Studio.